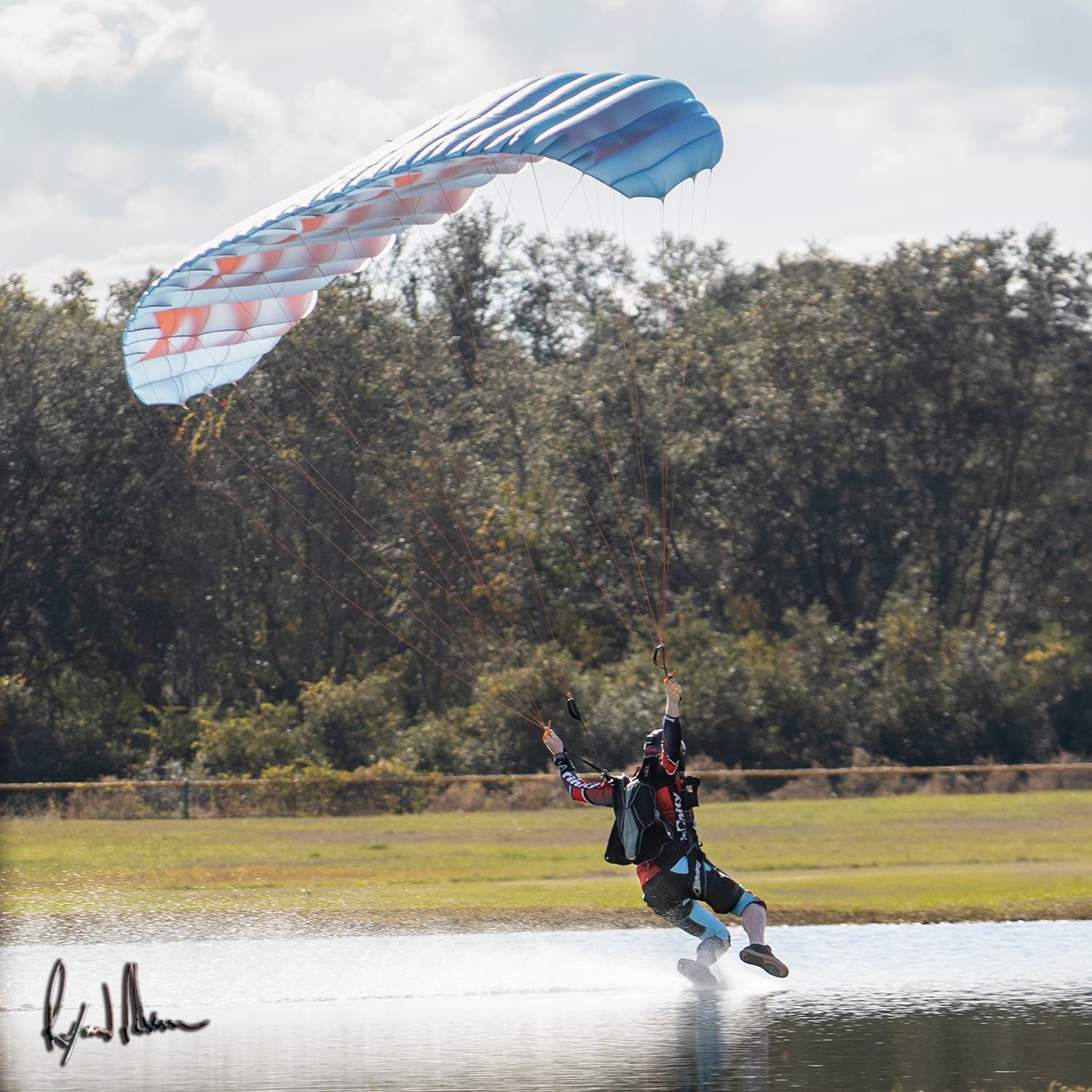 (He's got a thing for jorts)

As a new jumper in 2010, I was terrified to make a new rig order. It seemed like such a huge investment. Naturally, I did a lot of research and checked out a lot of rigs. I remember a friend of mine had just gotten a new Infinity container. I asked him why he chose Infinity, which I had never heard of. He walked over to his packed rig, slipped two fingers under both sides of his main flap, lifted it up and started bouncing the rig up and down....the flap stayed closed!! In that one demonstration, I was totally convinced and no longer questioning what rig to get. 6 years and 3 containers later, I still firmly believe in only 1 container.

For being incredibly tough and tight, the Infinity is the most comfortable container I have ever worn. During CRW jumps, I spend 10+ minutes every jump suspended in that harness. It's the best looking rig on the market, the lead times are always great and the customer service is second to none! Riley is a real peach and the company's passion for their customer's happiness is so obvious. I have been reppin VSE since my first one in 2012, as anyone who knows me could confirm, and I am so honored to be a part of this awesome team! Just try one on and you'll be placing an order.

I was a shit show new jumper with no direction. A promise to a great friend, Joe Thompson, had landed me on my first CRW jump on jump #101. After another on jump #102, I was hooked. Joe started The Raw Dogs which we have turned into a reputable traveling CRW circus, putting on CRW camps and teaching anyone with interest all over the U.S. for no profit. That is how we were taught, so we wanted to continue to pay it forward. The Raw Dogs have been bangin it out solid for the last 5 years and we have independently hosted the infamous Dink Dink Boogie for the last 3. After focusing entirely on CRW and building skills to organize bigger jumps, my fantastic mentors have asked me to help organize at a lot of really great events. I have been learning from the best in the world and organizing alongside them at boogies. I feel that I found my discipline early and have worked very hard to not suck too bad. Now, I am at full stoke about swooping as well as HP flocking, which is essentially much faster, awesomer and way more insaner no-contact CRW. My plan is to continue to be a part of and grow the regular CRW community while putting the same effort into this new passion.

I am fortunate enough to have super skilled friends with the same passion for pushing the boundaries as me. I like coming up with ideas that have previously been thought of as impossible, if thought of at all...and then nailing that shit! I am grateful to learn from some really analytical folks which teaches me to take both failure and success on jumps as something to improve on. It can always be better. When you raise the bar across the board, leaving nobody behind, everyone has more fun.

Organize at Spring Fling in FL

Organize at Perris Fall From Planes in CA

Organize at GoBig in Quebec

Organize at The Homegrown Boogie in MI

My fondest memory in skydiving:

We (The Raw Dogs) went to this dropzone that wouldn't want to be known by this story to do a crw camp and wanted to jump once before the camp started. We knew NOBODY there and nobody knew us. After hours of playing frisbee in 90 degree weather, waiting for enough people to show up to send the otter, we take off with a full plane and the clouds sock in at about 1500 ft. At altitude I look out and see what I think is the dz for a split second. Nobody else is convinced but all for 1 and 1 for all right?? We exit with a 5 way, wearing shorts and tank tops, and instantly get nailed with sleet. Our crw jump, 4 stack + video, gets out and they close the door and land the rest of the load. We quickly slam together a 4 stack and ride it out through this gnarly sleety, cloudy, bumpy, rainy storm, howling and screaming as we are feigning happiness for what is surely the last moments of our lives. Meanwhile, everyone on the ground is preparing vehicles to go pick up the idiot crw guys that are absolutely going to land off. Then we come out of the clouds at 1500 ft in a 4 stack right over the DZ. Land on and say, "Alright, who's ready for CRW camp?" Street cred for life!

There's nothing I feel more safe and confident with than my Infinity.